What can I do with my pomace – Part 1 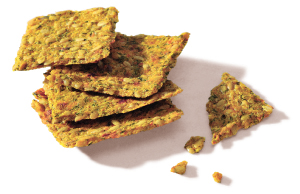 Juicers are Keimling’s flagship products – the Green Star Elite™ is the favourite among the juicers. Looking at the technical features, colour and design, you quickly come to appreciate why the Green Star Elite™ is subject to continuous further development. Although there are no actual deficiencies to be found anywhere, the manufacturer still wants to perfect this model even more.

It is incredible but true that in the case of the Green Star Elite™, all efforts to strive for perfection have reached their limits because it could hardly be made more perfect than it already is. What makes the Green Star Elite™ so special is the end product, namely the naturally healthy juice. The vital juice, consisting of fruit, vegetables, wheatgrass, sticks of celery or other similar ingredients, containing a maximum of vitamins. Three steps are needed to gently produce raw food juices which contain the maximum possible amount of enzymes and minerals.

But what many users of the Green Star Elite™ do not know is that they can do more than just make juice with this appliance. The pomace, generally considered unusable, is suitable for much more than just being thrown away. Pomace is most definitely a product with a value. The residue from the press is not only suitable for eating, it is even becoming quite an insider tip for cosmetics as well.

It makes no difference whether you decide on apples, carrots or even parsnips – what is left over is always the same, solid residue which might have not much in the way of taste – if you have used the Green Star Elite™ that is – but it can certainly still be used as a supplement. Pomace is ideally suitable as an ingredient for muesli in the morning or in the form of home-made bread, naturally based on raw food foundations.

Raw food bread also in principle includes “Essene bread” as well, although it is actually a form of sun-dried flat bread. A dehydrator can of course act as a substitute for air-drying in the sun, thereby enabling prouted bread to be made the whole year round.

This bread is normally made with vegetable pomace. To go with it, ground nuts, seeds or various types of cereal have to be spread on a tray along with water or even oil as an alternative. Finally, the right temperature has to be entered on the dehydrator, which, as we know, is about 40 degrees Celsius.

Pomace is also ideal served with cold or warm soups, but as a general rule it should be noted that pomace can be recommended as a side dish but not as a main dish because its lack of taste means it is neither very filling or tasty.

The residue from the press can also have surprising effects in cosmetics. What the Romans used to believe in earlier times is still a steadfast myth even today – beauty pomace, next week’s topic.

This entry was posted in General, Raw food recipes, Vitamins. Bookmark the permalink.